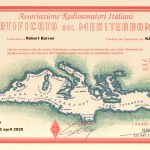 During the the time of the Roman Empire the Mediterranean Sea was sometimes known as the Roman Sea. The Romans themselves referred to it as Mare Nostrum (“Our Sea”). It’s fitting that Italy, whose capital is Rome, should provide an Amateur Radio award promoting contacts with modern countries that now line its shores. For this […] 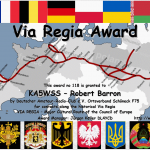 There are several things about an Amateur Radio award that can interest me. Learning something while earning it, a handsome award with flags, a map and no cost are a few things that come to mind. The Via Regia Award touches on all of those points. The Via Regia (Royal Highway) refers to the oldest […] 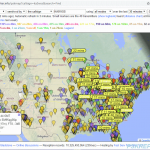 After calling a station on Nauru using FT8 for some time with no response I was left with a question. Is my signal getting out at all? Is the target station deaf? How would I know? Navigating to the PSK Reporter website I was able to quickly determine that no station anywhere was receiving my […]

Worked All States (WAS) 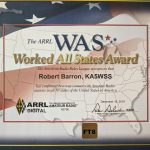 The American Radio Relay League’s (ARRL) Worked All States Award (WAS) is one of the most prominent domestic awards in Amateur Radio. To obtain the award applicants must submit proof of having worked another Amateur Radio station within each of the 50 states that make up the United States of America. I recently achieved WAS […] 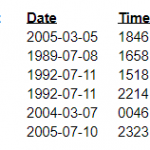 When looking at Amateur Radio operating awards and the rules that apply to them you will often come across the acronym GCR. GCR stands for General Certification Rules. It defines a method by which the operator can prove to the award manager that they successfully made and confirmed the required contacts for an award. Traditionally, […]

Get Your ARRL Certificates 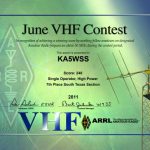 Certificates are the awards of Amateur Radio contesting. Many Hams around the world dedicate large amounts of money and time building up stations and operating skills to take on their competition and win. But there are plenty of opportunities for participants of all levels to take part and compete against similarly equipped stations nearer to […]

This is one of a series of posts highlighting specific features of my Amateur Radio log conversion software utility LogConv. Auto Time Increment is a seldom used LogConv feature that helps ensure the ordering of log data is maintained even if the input file’s output cannot. With the data residing in a text file there’s […] 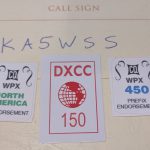 No, this is not a post about the high price of HF gear, or anything similar to that. Instead it’s about award stickers. I recently received two stickers for two separate awards and thought I’d pontificate a bit about them. The two stickers that just arrived are for my DXCC Phone and WPX Mixed certificates. […] 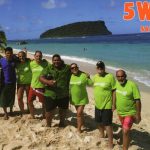 A couple new cards arrived in the mail today: Both are new countries for me, counting towards my DXCC Phone award.

Pay Attention To Your Tools

CLACKY-CLACKY-CLACK! I’ve owned an LDG Electronics AT-200Pro Autotuner for years. It’s done a great job tuning up various antennas I’ve owned over the years. I’m not sure I could be more happy with it. So it was a little bit of a surprise recently when I fired up the rig to make an FT8 contact […]